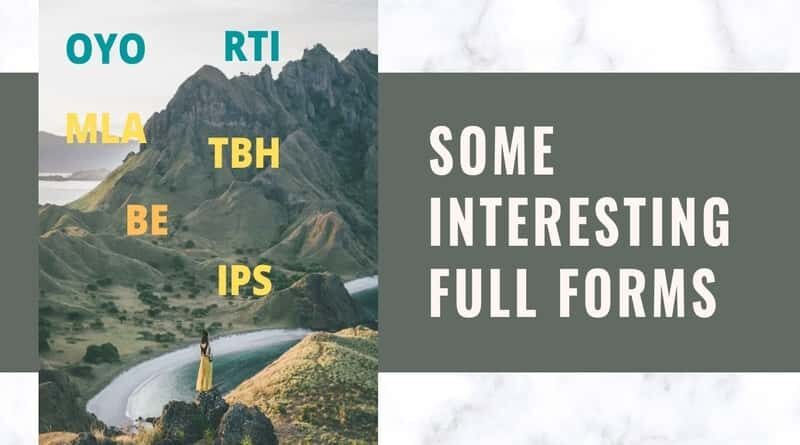 Nowadays, slangs are very popular among people of all age groups. Almost everyone throws acronyms around like confetti, and if you are not familiar with them, do not feel this heart, and as we are here with some interesting full forms so that you can grasp onto them. We heard many acronyms on a daily basis and for many of those we have to do google to find the full forms. Like, most common we searched for full form of OYO, full form of tbh, MLA, RTI, and much more. In this blog, we will cover all these abbreviations with an interesting story behind them.

Let’s Get Started with the details of interesting acronyms:

Tbh is a very popular slang on the internet and social media which stands for “To Be Honest”, and very popular since it was adopted by teens. It is a basic term of statement that is used by honestly expressing one’s views on how they feel about a person or topic they post. Tbh can be flattering, a positive one, of course, and with negative remarks that you may not support or not your head with. Teens use this acronym “TBH” whenever they posted any pictures on social media with a caption, like my picture with tbh. So, when people comment on anyone’s post it’s like “tbh you are beautiful” “tbh you are funny”.

IPS stands for Indian police services. It is one of the three all-India services of the Government of India. Many of us don’t know the full form of IPS yet it is simple and easy to learn. It was found in the year 1948. The authority responsible for the functioning of IPS is the ministry of home affairs. It has a very serious entrance exam related to it known as the IPS exam. The Indian police service examination is a constituent of the civil services examination and is conducted by the UPSC every year.

The IPS services the divided into sub-parts such as crime branch, criminal investigation department, home guards, and traffic bureau.

Read Also: How to Get Jio Puk Code

Many people don’t know the full form of OYO, OYO hotels are very popular in India and they are couble friendly. The full form of OYO is “On Your Own” room. It is currently India’s largest hotel network change spread over more than 199 cities. Its headquarters are located in Gurugram and Haryana. Oyo has more than 6500 hotels presently and they provide customers with comfortable and hygienic rooms at unbelievable prices.

Mr. Ritesh Agarwal is the founder and CEO of OYO. The special feature of OYO is that it does not own most of the hotels but the mechanism of its working is that it just hooks up with the hotel and ensures good service for the customers, who book rooms using OYO app.

Before reading the term honestly thinks how many of us know the full form of BE. BE stands for the bachelor of engineering. It is basically an undergraduate degree program in engineering with a duration of 4 years.

This course is the same as pursuing BTech. The prerequisites for taking admission in BE is 10 + 2 years of schooling or the completion of the PUC ( pre-university course). BE is a knowledge-oriented course and is theoretical in nature. But it is an engineering degree. A student studying BE will deal with engineering aspects of science only.

In case of any mismarking in exams of any wrong information, we heard from the people about to file RTI. But what exactly is the meaning of RTI? So, the full form of the most used daily acronym is the “Right to Information Act”. It is an act of the Indian constitution that was established in 2015 and has the motive to promote transparency in the government institutions of India.

With the help of RTI, a common citizen of India can demand any type of information from any government agency and the organization is bound to reply within a period of 30 days, failing which, a huge monetary fine is imposed on the institution.

The interesting one and one of the most difficult full forms of MLA stands for the “Member of The Aegislative Assembly.” It is a second level of the Indian administration system. MLA is basically the person which is elected by the voters of a specific zone. There are approximately 5 – 10 MLAs for every member of parliament that are the representatives of lok sabha. They have a tenure of 5 years.  Remember  MLA full form when someone asks from you next time.

The basic duties of an MLA include :

The least common and most metallic element in the nitrogen group is bismuth (Bi) (Group 15 [Va] of the periodic table). Bismuth is a glossy, brittle, hard substance that is coarsely crystalline. It stands out from all other metals thanks to its colour, which is gray-white with a reddish undertone. Although bismuth is flammable at high temperatures, after melting, it typically stays with the other metals. In the anode sludge produced during the electrolytic refinement of copper, bismuth is one of the byproducts.

Board Software Development Kit is referred to as BSDK. A group of software tools and services known as the Board Software Development Kit, or BSDK, assist boards in running, managing, and improving their organizations. The Center for Board Governance, a nonpartisan think tank, spent more than ten years researching and developing the BSDK, which is the result of a collaboration between the Center and the technology sector. Any company, big or little, public or private, can use the BSDK as a platform for better governance.

No full form exists for the word “sir.” It is a word that is related to the old word sire. Also, this message is intended for all respectable gentlemen around the world. This honor is also bestowed upon numerous generals and army staff. Additionally, in British culture, the Queen Gives This Word to Everyone Who Has Made the Most Contribution in Their Field. But the men are addressed as SIR, and the women as Madam.

Nso full form in India is National Science Olympaid. It is a particular kind of examination that the Science Olympiad Foundation (SOF) administers to students in grades 1 through 12 once a year. The fundamental goal of NSO is to improve students’ scientific knowledge, cognition, and reasoning abilities as well as their analytical, problem-solving, and analytical capabilities. The entire form of NSO is a frequently asked query by students. The exam is of the objective variety and is divided into two levels: level one and level two. Students from grades three through twelve who did well on level one may show up for level two. This test is given once a year in offline mode and lasts for an hour. At the zonal and worldwide levels, the best performers are recognised with accolades and crash prizes. NSO full form in hindi is नशनल स्टैटिकल ऑफिस .

Rta full form in transport is the Regional Transport Authority (RTA) or the Regional Transport Office (RTO). It is the department of the Indian government that is in charge of keeping car and driver databases for different states in India. The RTO is responsible for the issuance of driving permits, managing the collecting of vehicle excise duty (also known as road tax and road fund license), and selling customized registrations. The RTO is also tasked with checking the vehicle’s insurance and passing the pollution test.

The term OK is used to express acceptance, agreement, approval, or recognition. It can also be spelt okay, ok, or O.K. Olla Kalla, please expand. It is a Greek term that signifies everything is right. When we concur with each other in a discourse, we frequently utilize this word. Chatting also makes advantage of it.

Md full form in medical is Doctor of Medicine. After completing a medical MBBS programme, students can pursue a 3-year postgraduate degree called an MD. Upon completion of three years of training, an MD is recognized in nonsurgical fields. Candidates should have an MBBS degree in order to be eligible for the course since MD is a postgraduate level.

Bachelor of Medicine and a Bachelor of Surgery is how the term MBBS is officially spelled. In order to become a doctor, students must complete the MBBS programme. One of the top professional degrees in science and medicine is the MBBS degree. The MBBS programme takes five years to complete, plus a year is spent doing an internship in a hospital, a clinic, or a rehabilitation facility. Aspirants can choose from a wide range of jobs after completing the full MBBS programme, including oncologist, general surgeon, endocrinologist, pathologist, neurologist, and physician.

The conclusion part for this article would be that this is a blog on the most common abbreviations used nowadays. After reading this blog you would be easily able to use acronym abbreviations in your own way and will also know the full forms of most of the commonly used terms.  We will regularly add the acronym of other most used terms.

Acronyms for other commonly used phrases will be added on a regular basis. I hope you are completely clear of any remaining ambiguity on the full forms of ok, Bi, Mbbs, md, and other terms. Enjoy your book! 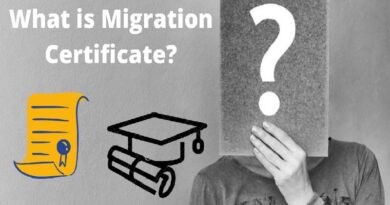