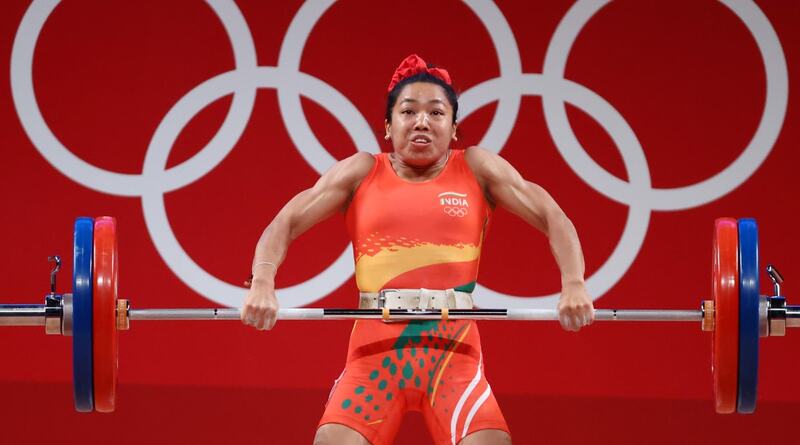 CThis name now needs no introduction. “Mirabai Chanu” a name that has made India proud and glorified worldwide. This name is all over the newspapers, every Indian is shouting this name, everyone is search Mirabai Chanu Wiki information.. But  Mirabai had to struggle a lot to achieve these heights. So let me give you a glimpse of her heart robbing journey, so let’s tight our seat belts. In this article, we will discuss about the introduction about Mirabai Chanu, age of Mirabai Chanu and medals, records won by her.

Let’s discuss all the details and biography.

Saikhom Mirabai Chanu age is 26 years old and she is an Indian weightlifter who came into limelight after winning a silver medal in weightlifting at Tokyo Olympics 2020. She was in the Women’s 49 kg category.

Her glory is not restricted to Olympics only, she has won world championships and various medals at commonwealth games.

But this is something that everyone knows about chanu, let me show you her early struggle.

Unlike other kids, Mirabi was quite focused from an early age that she wanted to do something big, which she indeed did.

Mirabai does not hail from a powerful background; her father was a normal government employee and her mother was a samosa vendor.

From which state Mirbai Chanu came ?

She is a huge follower of Sanamahism , but has great interest in Hindu deities and she also worships them.

Mirabai earlier wanted to go for archery but could not due to her short height. Her passion for weightlifting was discovered by her parents at the age of 12 when she could lift heavy bundles of wood, which her brother couldn’t.

She received her training from the sports academy of Manipur where her talent was reckoned by Anita Chanu, a former weightlifter and coach.

However the journey was not that easy as she used to travel to the academy with the truck drivers carrying sand.

Mirabai’s coach was Vijay Sharma who himself said that her journey was filled with ups and downs. Her journey started back in 2006 which was supported by international weightlifter and coach Anita Chanu. It was very difficult for her due to her humble background. She has five siblings. She was very hardworking and disciplined.

Major breakthrough in her career started after she shifted to National Camp in Patiala in 2011. It was difficult for her to adapt to the unfamiliar environment of the National institute of sports, she was also homesick at that time.

Her coach Vijay  Sharma turned out be the shining star for her career, with her guidance

She won the silver medal in the Commonwealth games. There were some difficulties in their collaboration as she could win the Rio Olympics, which was a low phase of her life.

Being an athlete is not easy, so for her during commonwealth games she suffered a lower back injury. This was a very low phase of her life as she hasn’t touched the baseball for four months and she has started giving hope of resuming competitive weightlifting. But with proper medical care she overcame this phase by making a world record at Asian championship by lifting 119 kg.

Suddenly this girl from Manipur was all over the news, every Indian was proud of her as she created a history by winning silver medal at 2020 Summer Olympics in Rio on the first day of the event. She Carried out a total lift of 202 kg. She became the first Indian weightlifter to win a silver medal in the Olympics.

Winning the medal at Tokyo Olympics was quite difficult for her as she developed menstrual cramps a night before the competition. This was not her first time experiencing such things, it happened with her during the  Gold Coast Commonwealth games in 2018 but she stood firm by winning a gold medal.

It was very difficult for her but with her zeal and patience she won a silver medal. Mirabai Chanu lifted 202 kg(87 kg in snatch and 115 kg in clean and jerk). She also thanked the Indian government for providing her top quality training service in the USA. She was in the USA two months before the Olympics as she was doing her training there after that  she went to Japan from the USA which was a tiring journey of a wholesome two days. After reaching Japan she immediately started her training in the Tokyo Olympics village.

After the Olympics Journey

There was an immense crowd waiting for her return to the airport, she was getting applauded by every Indian. She was felicitated by a whopping amount of 20 lakhs by Manipur Chief Minister Biren Singh.

Her mother gifted her a pair of gold earrings which have the designs of the five  Olympics rings embarked on it. She was bestowed with the position of Additional Superintendent of Police ( Sports),in the Manipur police. An event was hosted in the national capital after her return. Domino’s India made an announcement of providing free pizza to Mirabai as she expressed her craving of eating pizza after winning the medal.

As mentioned above her journey was not that easy. There were many hurdles, one such was transportation from her home to the training academy in Imphal which was 30 km away from her home. With 10 to 20 rs in pocket she used to leave for the academy and she couldn’t afford private transportation everyday so she used to get hitched with the truck drivers.

But she didn’t forget her roots and hosted a lunch event for 150 truck drivers and their helpers and gave each of them a Manipuri scarf and shirt.

She was also given Rs 1 crore by Manipur Chief Minister N. Biren Singh. She was also awarded with Rs 2 crore and a promotion by Indian Railway Minister Ashwini Vaishaw.

Others awards won by Mirabai:

Apart from the Medal she has been felicitated by some famous prestigious awards by the Indian government.

Apart from this she has been widely acclaimed by the government of India and various dignitaries all over the world.

It is just the start she has a lot to achieve now, she has started practicing for the common wealth games and her next target is to win a medal at Asian games in 2022 and change her medal into gold in the Paris games.

Asian games victory is the only victory that is missing from her cabinet. It is one of the tournaments where Chanu wants to win the medal since she started weightlifting.

In Paris Olympics 2024 she will convert her silver medal into gold medal for sure. She is also working on the path of encouraging girls to take part in sports and the importance of family support.

She is also very focused on her nutrition intake and training regime to maintain her health to ensure that she remains a champion.

Despite her humble background and so many obstacles she was able to achieve so much, yes indeed there were so many bad  days, but she was able to overcome them with her hard work. All her struggle and hard work have paid now. She has to go through a lot with hours and hours of sweating in the gym. Also, she had to make a lot of sacrifices as the saying goes to achieve something you have to give up on something.

She puts her zeal into her dream and devotes herself completely to it  Even after such a big event and achieving so much she remains touched to the ground and unchanged.

She still  is the same girl who eats food with family sitting on the ground, meeting her friends and relatives clicking pictures with them.

There are a lot of Mirabai in our country. It’s just that they need to realise their potential and Excel in that field with proper dedication. Now, we will see her in common wealth games 2022 soon and India is expecting gold medal from Mirabai Channu.

Ques 1. Does Mirabai have a Spouse?

Ans. No, She is Unmarried.

Ques 2. What is her current age?

Ans. She is currently 27 years old.

Ques 3. How many siblings does she have?

Ans. Including her, there are a total of 6 brothers and sisters.

Ques 4. What is her exact height?

Common Wealth Games 2022 – All You Need To Know About