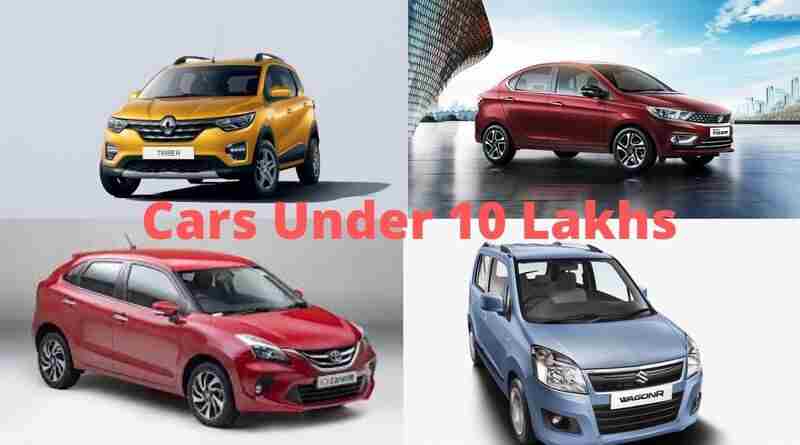 Buying a car is the “Big Indian dream”. And, most of the middle class people try to look for the first car under It is considered the standard accessory that acts as an entry ticket needed to shift from the lower to the upper middle class. Every Indian wishes to buy a car for their household at least once in their lifetime. With the advent of globalization and inflation of the era, with a substantial increase in pay ranges, this is not a very distant dream anymore. According to a report by Team BHP, the Indian automobile industry grew from roughly 2 million in 2011 to approximately 3.12 million in 2018. The figures went a bit lower in the pandemic era mainly due to changes in BS6 regime for pollution control and the COVID crisis. But as situations seem to get better, we expect a boom in the car industry again.

Below mentioned are the top cars under 10 lakhs that have attributed to the overall sales of cars in the nation, especially because of their adoration by the middle classes due to feasible costs-

Automobile “Write for us”

Let’s start with the models:

Launched in 1999 end, Wagon R is literally the OG Indian family car. Streets of India are incomplete with out at least one Wagon r strolling about. Even after 20 years of release, Wagon R is still among the top buys for Indian buyers.

Coming with a robust design language, Maruti Suzuki wagon r gives a dual tone interior. It given an ARAI mileage of 20.52 kmpl and a city mileage of 12.19 kmpl. The 4 cylinder model comes with a 1197 cc engine. It was a 32 L fuel tank capacity and bootspace of 341 L. The 5 seater car is 3655mm long, 1620mm wide and has a wheelbase of 2435mm. it comes with airbags, power windows, and anti-lock braking system.

Renault Triber is among the more spacious cars in this price range. Launched in august 2019, Triber is one of the most bought cars by Renault in the Indian social backdrop. It stands out from other cars in the same price range due to distinctive features like an 8 inch media-nav touchscreen with apple play and android auto. One of the most liked features of the car includes its modular seating, that can be converted into a two, four, five, six, or even seven seater as per needs.

The car comes with a mileage of up to 20 kmpl. Available in manual and automatic models, it has an engine of 999cc. the car has a fuel tank capacity of 40L and a boot space of 84L. The automatic car has 3 cylinders and an ARAI mileage of 18.2kmph. the average service cost of the car comes out to be approximately Rs 2034 per annum ( for the first 5 years).

With a mileage of 30.48 kmpl, Hyundai’s Santro comes with a 1086cc engine. The fuel tank has a 35L capacity while the boot space is of 235 L. the extremely spacious car gives comfort feels and lots of leg space. The average service cost of the car is approximately Rs 2429 for the initial 5 years. The car comes in 5 colours.

Launched in June 2019, Toyota Glanza is the new hatchback car from Toyota. Some of the most special features of the car includes environmentally conscious UV cut window glass that reduces the greenhouse gas build up inside the car when under direct sun. This can be considered as another best cars under 10 lakhs.

The new hatchback from Toyota, Glanza has a K series petrol engine of 1197 cc, that helps achieve a low-end torque. The car gives a mileage of 19.56 to 23.87 kmpl. The 5 seater car comes in manual and automatic models. the car gives a fuel tank capacity of 37 L and a boot space capacity of 339 L. The service cost of the car is estimated to be approximately Rs 3416 per annum.

Released in March 2017, Tata Tigor is a standard masterpiece from Tata. Like its sister models, Nexon and Tiago, Tigor is also one of the safest to drive cars in the Indian automobile sector. The car also has Harman music systems, some of the best in the sound industry. One of the most welcomed features of the car is its new CNG model, making it environment and pocket friendly. In the range of cars under 10 lakhs Tata Tiagor is a favourite one for many of us.

One of the safest cars on the road, Tata Tigor gives approximately 20.3 kmpl mileage. It has an engine of 1199 cc. the car is available in manual and automatic models. it is a 5 seater sedan with a boot space of 205 L. It has a 4-star NCAP safety rating. It comes with power steering, wheel covers, front power windows and airbags.

Hence, we can conclude that depending upon the personal needs of a customer in the under 10 lakhs range, any of the cars out of the given choices can prove to be an ideal choice. Readers should note that Indian automobile sector offers many more cars falling in the given price range but as per our discretion we have selected the models we found most fit for a variety of readers with various needs.

Ans. The best car under 10L would be subjective to the users’ needs. In the given article we have covered a varied aspects to suit different users and their needs.

Ans. According to tested standards, TATA Tigor is the best car in the under 10L range for safety. The car was also awarded full 5 stars in safety standards and comes with airbags.

Ques 3. Which is the best car for long drives?

Ans. For rough terrains and rocky trips, Renaut’s Triber can be the right choice. Being very spacious, the car also makes travel comfortable.

Ques 4. Which is the best car for family?

Ans. Tata Tiagor is the best car for families. It caters to needs to the group, like space and safety, making it the most feasible choice.